Last September, Oracle revealed the changed plans for Java EE 8 during the JavaOne conference: to be more relevant with the currently ongoing ‘Cloud’ trend, and with an ambitious time schedule that includes a final release in the second half of 2017 (yes, that’s this year!). It was communicated as a proposal, and the final decision would not be taken before a new Community Survey was kept. When the results came in late December (details here), the resemblance with the proposed changes was striking…

In short, this is what it boiled down to:

Is the development of the various JSRs on track?

During the half year since JavaOne, there could clearly be more activity detected than in the period before that, when work seemed all but abandoned for most JSRs. But is this sufficient to meet the deadline? Not a single ‘final draft’ is published, so none of the standards will be finished early.

I tried to plot the various JSRs and their ‘position’ regarding the JCP process: 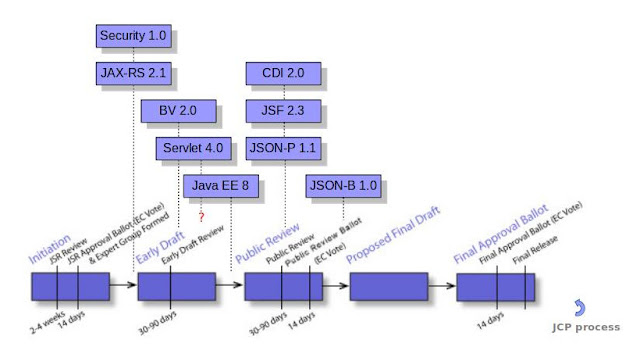 It seems that there is plenty of work to be done to make sure that all of the nine JSRs that make up Java EE 8 will be ready for a ‘final release’ before the end of the year.

So, if you’re interested in helping out, go to your local JUG and join their Adopt-a-JSR program! If such a program is not in place yet, help them get one started!

Oh, and if you happen to be living in the Netherlands: contact us at jcp@nljug.org, and we’ll assist you in getting your contributions where they count!

1 thought on “Will Java EE 8 meet its schedule?”

This site uses Akismet to reduce spam. Learn how your comment data is processed.